This is one of my favourite pictures from the Boer War. It is labelled Royal Munster Fusiliers fighting from behind redoubt at Honey Nest Kloof (Feb 16th 1900).

Now I have always wondered if this was real or staged for the photographer. A number of things have concerned me.

1) the Cameraman is very high up on the ramparts, It looks like his camera and head are above them (not a good idea as a battle is raging)

2) The two soldiers closest to the camera are bareheaded, would a NCO or officer allow this?

3) The soldier laying in the centre seems to be sitting up staring into the camera.

Then again, the treatment of the casualties seems to be real and the officers in the background look like they are directing the action.

This afternoon I was browsing the excellent boer-war.com and came across this picture.

Obviously, this picture is taken either just before or just after the first picture. The only really difference is the soldier on the left is now staring into the camera and the one of the medical orderlies is also looking into it.

Does this second picture confirm that it is a setup or a real action shot from the Boer War?

What do people think?

To be fair I’m not bothered either way…it is still a great picture. 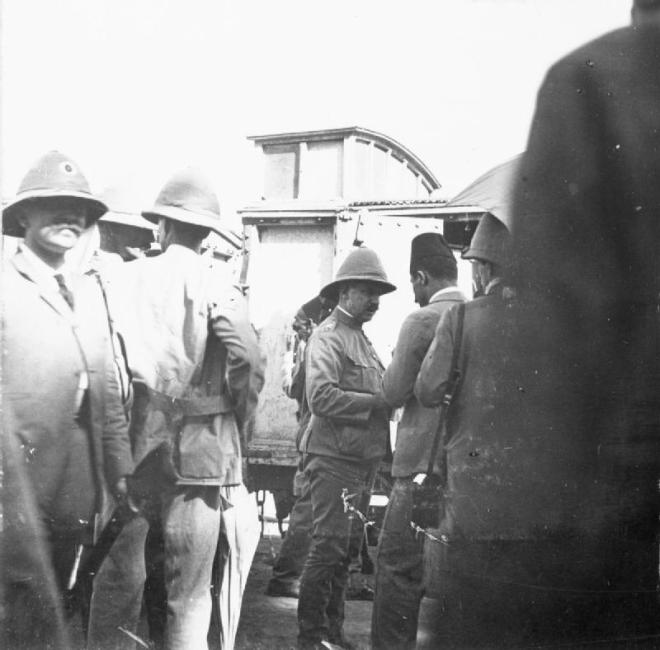 Director of Military Intelligence, Colonel Sir Francis Wingate and a group of army officers disembark from a train on the Sudan Military Railway, possibly near Atbara. The railway line had been constructed by the Royal Engineers. 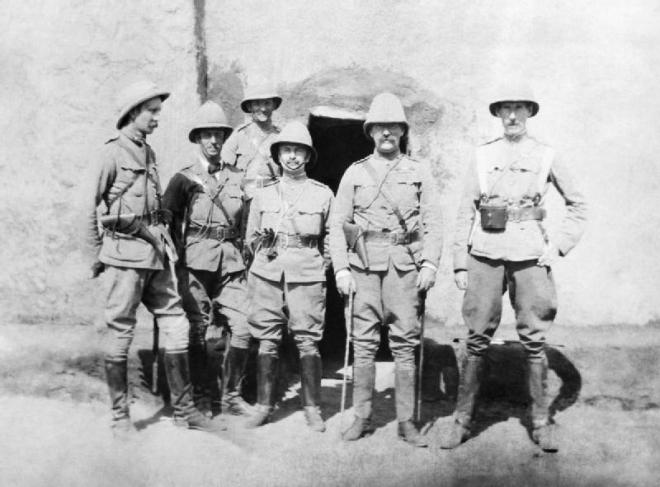 The Italian attache and military observer, Count Calderari and the Director of Military Intelligence, Colonel Sir Francis Wingate standing in front of railway trucks on the Sudan Military Railway, possibly near Atbara. 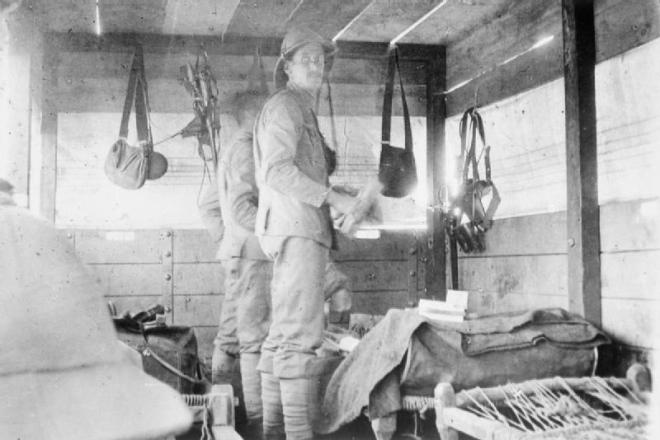 Soldiers inside a railway truck on the Sudan Military Railway, probably en route to Atbara. The truck is equipped with beds and personal equipment hangs from its walls. The original caption reads “First Class Sleeping Car”.

The defeated leader of the Sudanese (Dervish) forces at the Battle of Atbara, Emir Mahmoud, is interrogated by Director of Military Intelligence, Colonel Sir Francis Wingate after being captured. Note the camera mounted on a tripod in the background.

Soldiers of the Cameron Highlanders and Seaforth Highlanders dig graves in order to bury their dead after the Battle of Atbara. The British Brigade (composed of Royal Warwicks, Lincolns, Seaforths and Camerons) lost five officers and 21 men in the action while the Egyptian Brigade lost 57. The losses of the Sudanese (Dervish) forces led by Emir Mahmoud were estimated at 3000 or more. 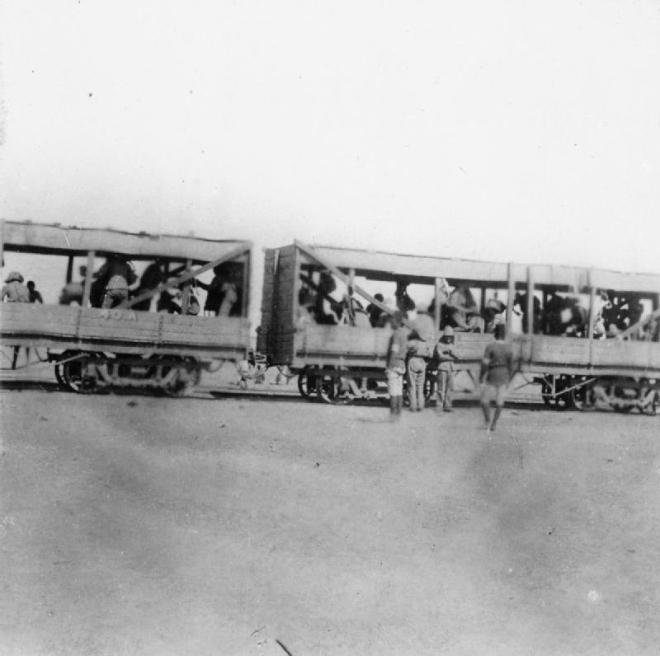 Men of the 21st Lancers entrain at Wadi Halfa in preparation for the journey south to join Kitchener’s forces.

General Kitchener, Sirdar (Commander) of the Egyptian Army (centre right) in discussion with the Commander of the British Brigade on the Nile, Major General Sir William Gatacre. Also with the group are General Gatacre’s orderly, Lieutenant Ronald… 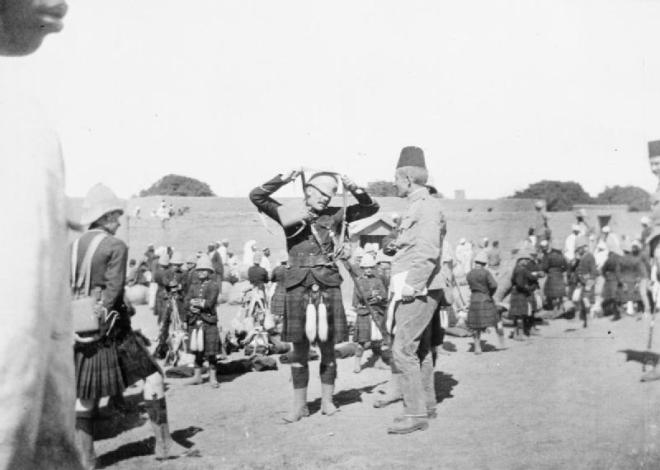 The Queen’s own Cameron Highlanders, wearing kilts and pith helmets, prepare to leave Darmali for Atbara in Sudan during the march of the British Brigade from Abu Dis to confront Mahdi forces at Atbara. The Special Army Order issued by the Horse Guards at the end of the campaign noted: The march of the British Brigade to the Atbara, when in six daysfor one of which it was haltedit covered 140 miles in a most trying climate, shows what British troops can do when called upon. 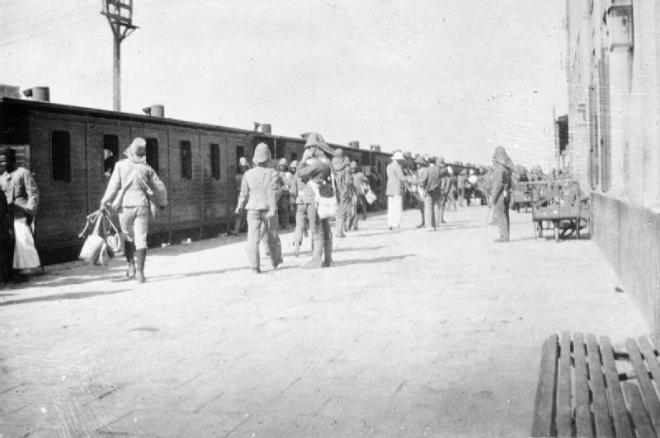 Men of 1st Grenadier Guards board a train at Cairo Station.

A group of soldiers of 1st Grenadier Guards wait outside their tent for a kit inspection, Cairo.

A group of soldiers of 1st Grenadier Guards wait outside their tent for a kit inspection, Cairo.

Brigade Major C A’Court, 2nd Rifle Brigade (on horseback left) and the commander of !st Grenadier Guards, Colonel Villiers Hatton (riding a donkey centre) on the parade ground during a field day at Atbara Camp. The Colonel’s Bugler stands in the foreground.